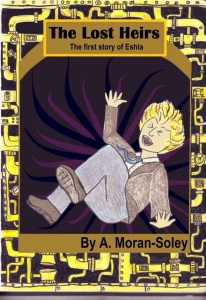 The Lost Heirs is aimed at a middle-grade audience without talking down to them. I picked up elements of Steampunk, Narnia and The Phantom Tollbooth, with a helping of The Goonies.

I am not generally fond of the fantasy genre, and I feel this book is ‘Fantasy for people who hate fantasy’.

It was refreshing to have science incorporated into the plot, and this book will inspire readers to explore the world of plants and their properties. The science was made fascinating and fun.

Eric, the main character, is also refreshing as a down-to-earth lad attending boarding school. He spent his early years with an eccentric aunt, and I like how Eric’s feelings toward her are a tad clouded. When he is thrust into a situation, he reacts like a real human being. Nothing flippant or precocious about him, which is such a turnoff in other books.

And Espog! He’s a furry little ally from Eshla that takes to Eric. I liked that he was an actual asset and not just there for the cute factor. Think R2-D2.

I would very much like to see this book succeed, so I will mention a couple of things that gave me pause:

– It’s good to avoid comparisons, because they create an image that sends the reader on another tangent. He or she is taken from the story to focus on another object.

-Joel and his sister Willow are royalty, and we are shown that they are nice kids with keen minds. However, they talk and behave just like Eric and his friends. I felt there should be a difference in Joel and Willow’s bearing and speech, not only because they are royal but because they are from another world.

-I felt the villan was introduced late in the story. He’s a good villain too, in the vein of Count Olaf. Once we meet him, he’s deliciously eeevilll, but the build-up was missing.

– In line with another reviewer, I like the idea expressed on the cover. Its execution, though, puts me in mind of a book for children younger than middle-grade.

I follow Sorley’s blog, and will continue to root for Eric and his adventures in Eshla!

One thought on “My review of The Lost Heirs by A. Moran-Sorley”